24 MAY: BIOTECHNOLOGY: THE NEW FRONTIER OF INGREDIENTS FOR PERFUMERY? 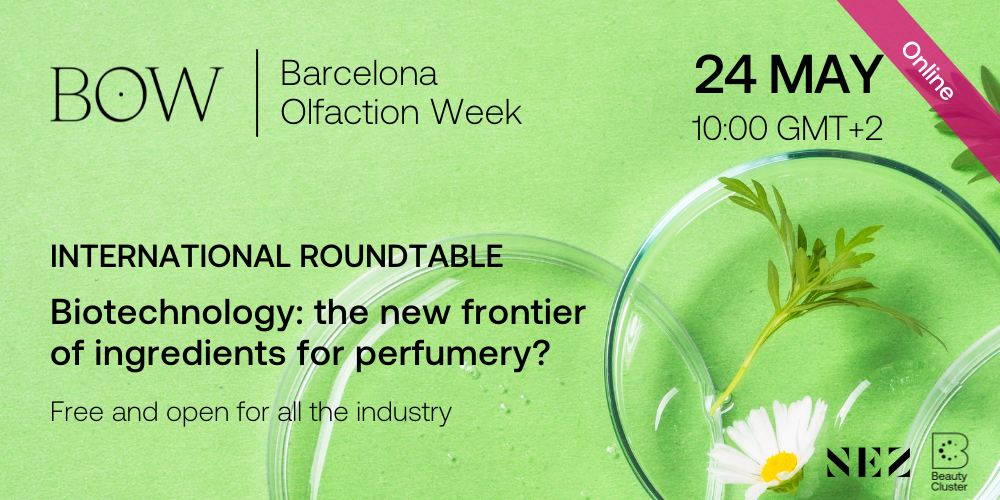 FREE AND OPEN FOR ALL THE INDUSTRY 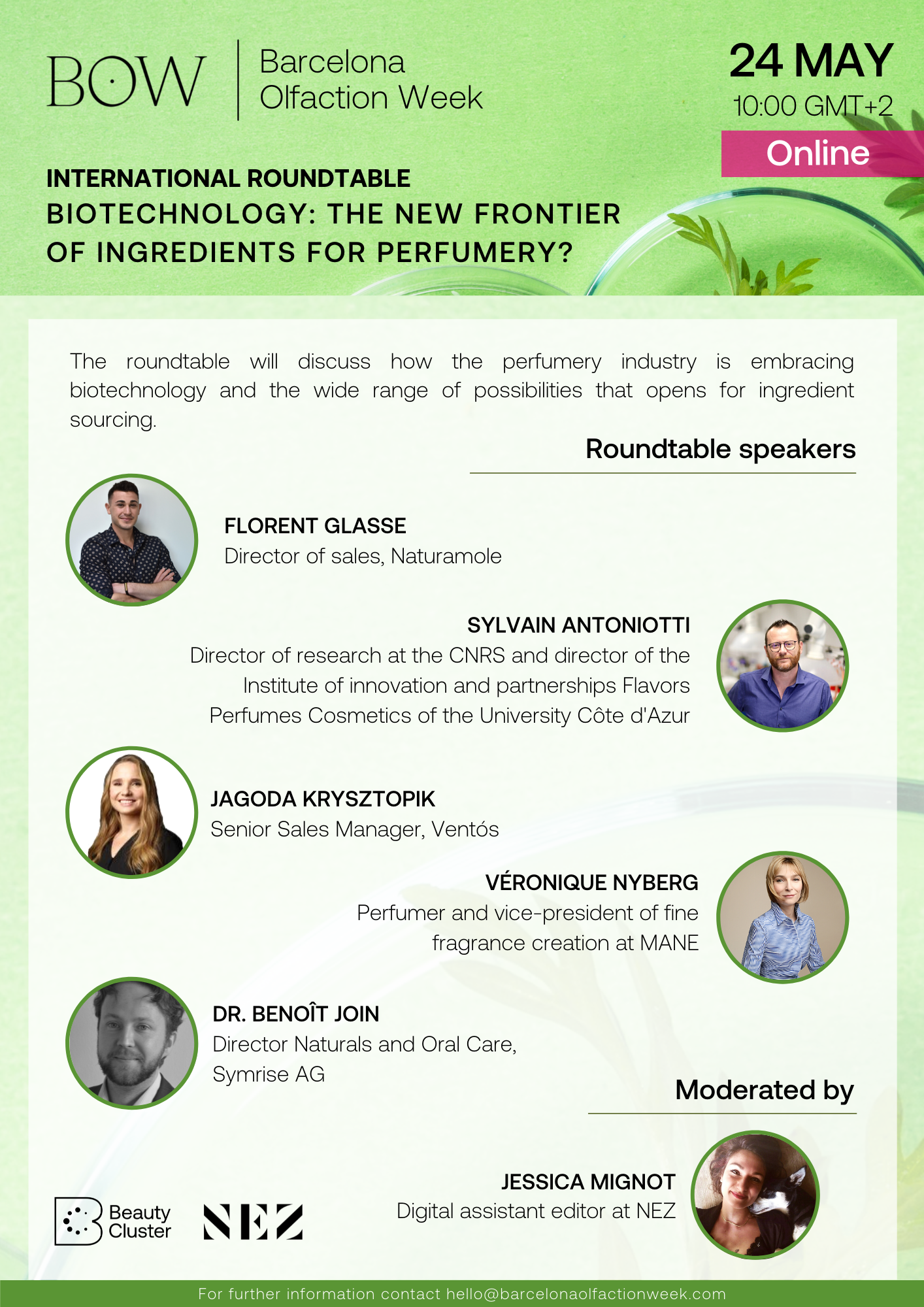 Next 24th of May (10:00 to 12:00 GMT+2) in the framework of the Barcelona Olfaction Week (BOW), Nez and Beauty Cluster organize a round table. International experts will talk  about the relation of biotechnology and  perfumery.

Biotechnology is emerging in the perfumery industry as a tool that can provide stability in the supply of ingredients, with no harvesting fluctuations that deeply depend on climate or seasonality.

Additionally it may enable new sustainability perspectives and better economic viability of ingredients in the market. This roundtable will discuss how the perfumery industry is embracing biotechnology and the wide range of possibilities that open for ingredient sourcing.

I’ve been working at Naturamole since almost 2 years. Before that, I was a student at the Paris-Saclay University and ended my studies with a Master’s Degree in Biotechnologies, but I’ve always loved the Sales domain, thus, I worked a lot on my own to get the basic knowlegde a good Sales-man should have. As my end-study intership, I’ve been hired as a Business Developer at Ynsect (a French Unicorn focusing on the production of the next generation of Food&Feed raw materials) to work over the development of some petfood business units toward the existing markets (which, at this time were -and still are- considered as ‘niches’).

After having studied life sciences and molecular chemistry with a Master of Science in 2000 obtained valedictorian with highest honors, Sylvain Antoniotti obtained a doctorate in chemical sciences in 2003 after a thesis in methodology of catalytic synthesis applied to the synthesis of odorant molecules (diketones, furanones, pyrazines). After a post-doctoral stay at the Rensselaer Polytechnic Institute (NY, USA) to work on biocatalysis and phenolic derivatives, he joined the École Nationale Supérieure de Chimie de Paris as a temporary teaching and research associate and contributed to the rise of gold catalysis which is now an intense field of research.

In 2005 he joined CNRS as a research fellow with assignment to the laboratory which would later become the Institut de Chimie de Nice. He obtained the habilitation in 2008, and founded his independent research group in 2012. Promoted research director in 2017, he has since led three research themes with a backdrop of sustainable chemistry and fragrance chemistry. One on multicatalysis and the development of new approaches to the synthesis of complex molecules including continuous flow chemistry, the other on the applications of biocatalysis to the production of innovative odorant ingredients and the last on the analysis of quality and authenticity of complex natural mixtures for perfumery. He is the author of more than 80 publications, 4 patents, 3 Soleau envelopes and dozens of conferences in France and abroad. In 2016 he was elected president of the scientific board of the ERINI platform in Grasse, then in 2017 was at the origin of the creation of the Center for creativity and innovation in sciences of odorants of Université Côte d’Azur, now an Institute for Innovation and Partnerships. Awarded twice with the CNRS doctoral and research award for exceptional contribution to research, he was promoted to the rank of distinguished junior member of the Société Chimique de France in 2020 and received an Excellence Award from Université Côte d’Azur the same year.

Graduated in French Philology at the Jagiellonian University in Cracow, she speaks 6 languages and decides to work in commerce. She starts her almost first professional experience at Ventos in 2007 at sales in the French, Italian, Eastern European and Russian markets. Nowadays, she is managing the purchase of natural molecules and coordinating the sales team for key customers in Europe. In 2022 she joins the biotechnology team and in parallel becomes responsible for the new Flavor Ingredients Division, coordinating new projects and supporting the team in the search for raw material suppliers.

Véronique Nyberg is a world renowned Senior Perfumer. Her creation style is a unique blend of intense emotions and a deeply-rooted scientific discipline. A talented artist, inspired by visual arts, sculpture and nature, she first set out on a scientific path to become a Doctor of Chemistry. Her immense yet structured creativity flourished when Véronique joined IFF’s School of Perfumery.

In her everlasting quest for aesthetics and cultural inspiration, she moved from Grasse to Amsterdam and from New York to Paris. Not only did she deepen her technical knowledge and sharpen her creative vision, she also learned to harmonize duality, and to master multi-sensory contrasts. She joined MANE in Paris in 2014 as Vice President Fine Fragrance Creation, with three key missions: Creative Direction of Fine Fragrance Perfumery, Discovery of new talents for the MANE School of Perfumery, Participation in MANE’s Scientific Committee.

Dr. Benoît Join graduated in 2004 in Organic Chemistry from the University of Caen, France. After getting his PhD in Organic Chemistry from the same University in 2007, he hold different post-doctoral positions (Nagoya University, Japan, JSPS Fellowship; Leibniz Institut für Katalyse, Rostock, Germany, Humboldt Stipendium) focusing on Green Chemistry and homogeneous catalysis.
He joined Symrise AG in 2011. After holding different positions inside the Research & Development Organisation, he was appointed in 2019 Director Naturals and Oral Care. His research topics cover among others the development of new Naturals for the Perfumery and the use and development of Biotechnology-based processes for Perfumery and Oral Care businesses.

This website uses cookies to improve your experience while you navigate through the website. Out of these cookies, the cookies that are categorized as necessary are stored on your browser as they are essential for the working of basic functionalities of the website. We also use third-party cookies that help us analyze and understand how you use this website. These cookies will be stored in your browser only with your consent. You also have the option to opt-out of these cookies. But opting out of some of these cookies may have an effect on your browsing experience.
Necessary Sempre activat
Necessary cookies are absolutely essential for the website to function properly. This category only includes cookies that ensures basic functionalities and security features of the website. These cookies do not store any personal information.
Non-necessary
Any cookies that may not be particularly necessary for the website to function and is used specifically to collect user personal data via analytics, ads, other embedded contents are termed as non-necessary cookies. It is mandatory to procure user consent prior to running these cookies on your website.
DESA I ACCEPTA